This week WEC NL published its report on CO2 reduction. Energy specialists from New Energy Coalition, energy analyst and ‘Future Energy Leader’ Miralda van Schot and Professor Catrinus Jepma, co-authored the report. Jepma also led a work session in which the strategic pillars of the report were introduced to the industry concerned. 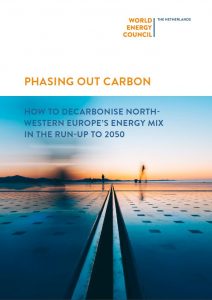 According to WEC NL it is possible to sufficiently decarbonise the economy in north-western Europe, while maintaining industrial production and providing safe and affordable energy. This will require extreme efforts in the area of the transition to green gas and sufficient generation capacity for green electricity. Europe, with its unique infrastructure, ports and industry, is perfectly positioned to globally lead by example and at the same time create value,  jobs and a renewed international competitive advantage.

WEC NL: ‘Europe, with its unique infrastructure, ports and industry, is perfectly positioned to globally lead by example and at the same time create value,  jobs and a renewed international competitive advantage.’

WEC is the international platform that deals in a broad sense with the world energy issues of today and in the future, already reported a year ago that North-Western Europe must be fully committed to hydrogen if the European climate targets are to be met in thirty years’ time. The new report from the Netherlands contains a detailed scenario on how to get there.

– Efficiency improvements in and further electrification of energy consumption

As electrical processes have less heat loss, electrification of the economy provides increased energy efficiency. Each year we will have to save an additional 1.3% of energy. That will have to be absorbed mainly by the transport- and agricultural sectors. In industry, there is not much more room to produce more energy efficient. In the long run we will therefore have to decrease the use of fossil gas and replace it with green gas and/or hydrogen. At the same time everything we can do electric, we should convert into electric.

While our electricity is becoming greener, decarbonising our fuels has not really taken off yet. This is partly caused by the high demand from industry for raw materials and electricity. Hence, in order to meet the Paris targets, we will have to start mixing biogas and hydrogen in natural gas supply immediately. Building up a considerable quantity of hydrogen is particularly important here.

Even if north-western Europe achieves energy efficiency, electrifies to the maximum extent and decarbonises all gas consumed, a considerable amount of energy will still have to be sourced from outside Europe. As a result, import dependency will only decrease to a limited extent. Awareness around this is important as it has geopolitical and strategic implications.

You can find the WEC NL report here.