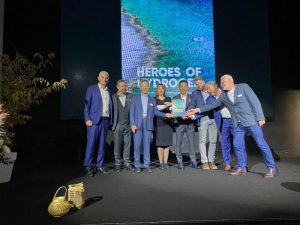 On Monday evening 24 October, during EU Hydrogen Week in Brussels, Hydrogen Europe, the European hydrogen organisation, presented the photo book ‘Heroes of Hydrogen’. Last week, HRH King Willem-Alexander of the Netherlands was given an exclusive preview and received a copy in advance from Jorgo Chatzimarkakis, of Hydrogen Europe and Patrick Cnubben of New Energy Coalition. The northern Dutch Hydrogen Valley has an honourable place in the book, which portrays the dawn of the green-hydrogen era. ‘This places the Netherlands at the heart of the energy developments of the future,’ says Cnubben. ‘As the first Hydrogen Valley in the EU, we are building the complete hydrogen chain in the northern Netherlands, a testing ground for global developments.’

‘Heroes of Hydrogen’ is a photo documentary and captures the genesis of the green hydrogen economy. Award-winning photographer Justin Jin travelled from the North Pole to the Sahara to capture these developments in the energy transition.

Hydrogen Valley North Netherlands is part of the EU programme HEAVENN. Patrick Cnubben, director of hydrogen strategy at New Energy Coalition, is the architect of the programme.

This week is Hydrogen Week in Brussels. The international event addresses the current state of research, politics, policy and economics of green hydrogen as a carbon-free component of the global energy system of the future.

About the book ‘Heroes of Hydrogen’

The fuel of the future is here, and energy pioneers are hard at work to usher in a new era. Hydrogen is the world’s most abundant element. It forms the sun and has the potential to power economies, leaving only water as waste. Although producing green hydrogen has long been considered too expensive, companies in Europe are working hard to make clean hydrogen affordable. Is the oldest element in the universe really unleashing a revolution? In this book, Hydrogen Europe enlists award-winning photographer and writer Justin Jin to see for himself. From the icy cold of the Arctic to the arid plains of the Sahara, these extraordinary images show how hydrogen is now decarbonising our most polluting industries. From the icy waters of the North Sea to the jewel-encrusted Adriatic coast, these stories portray the people in the hydrogen race.

Born in Hong Kong in 1974, Jin studied philosophy and social science at the University of Cambridge. He began his career as a Reuters text correspondent in London and Beijing, and soon launched an independent career as a documentary photographer and writer. Today, Justin is commissioned by leading media, brands and NGOs to work on visual stories. He creates stories around the world for National Geographic Magazine, New York Times, GEO and many others. He has won international awards including the Magnum Emergency Fund, Pictures of the Year International (POYi), World Press Photo Masterclass. His work has been exhibited internationally, including at FOAM, Rijksmuseum Amsterdam and the main stage for photojournalism, the Visa Pour L’Image festival in France.