Northern Netherlands welcomes 10,000 ‘energy students’ for energy transition. Will it be enough? 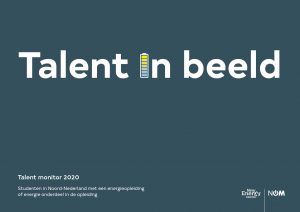 Today ‘Talent in Beeld’ (Talent in Focus) was published, a monitor of energy-focused students and thus the specifically trained workforce in the Northern Netherlands. The overview was compiled by NOM and New Energy Coalition and is an inventory of the ‘energy students’ appointed as such from vocational up to university level, in the Northern Netherlands. Of nearly 125,000 students, some 10,000 were designated as energy students in the 2019/20 academic year under review. This means that 1 in 12 graduating students enters the labour market with energy knowledge. Over 7,000 of these are on vocational level and 2,700 in higher education. The annual monitor will provide a useful picture of the available potential for the energy-related labour market and thus support the business climate for energy companies in the region.

The energy transition is in full swing in the Northern Netherlands region. The traditional natural gas sector based on the Groningen gas field is being phased out and at the same time there are enormous investment plans in the field of, for example, hydrogen. In addition to investment in technology, energy transition also requires investment in sufficient and properly trained people. Numerous reports from international think tanks indicate that green recovery will generate a large growth in jobs. This week, Algemeen Dagblad newspaper reported that the hydrogen economy alone will provide up to 23,000 to 41,000 jobs in the Netherlands. The right match in labour potential is an important factor for business development in the region. This is why NOM and New Energy Coalition have compiled the Monitor as published today.

Without properly trained people working in the new energy sectors, the energy transition will be in trouble. ‘It’s not just about people with technical knowledge and skills, but also about students and professionals such as lawyers, economists, communications people, planners, you name it. Almost all aspects of daily life touch on our energy system and vice versa. And we need the properly educated people for that,’ says Hielke Hekman, New Energy Coalition’s Human Capital program manager.

‘In recent years, knowledge institutions such as Hanze UAS, University of Groningen (RUG) and northern vocational schools have worked hard on education and research programs focused on the energy transition. This now translates into a growing group of ‘energy-interested’ students and graduates: in this region almost 17,500! This shows the growing awareness and interest in the energy transition, and it gives good hope for available workforce with targeted qualifications. Whether the right match will be made in the future labour market is the question, and that is where the Monitor that has now been developed comes in. Especially when we will have annually updated figures.’

With this Monitor in hand it is good to look at what training and new labour potential is still needed, it also brings into focus what talent is already available in the region. ‘This is important for the regional labour market; we can now analyse where any mismatch occurs,’ says Soraya Aimée Ludema, Project Manager Foreign Direct Investment of NOM. ‘But this information also gives a boost to the business climate for (international) companies in the energy transition. We can now show even better what talent the region has to offer.’

The monitor uses data from the vocational schools that are affiliated with Energy College (7 in the provinces of Groningen, Friesland, Drenthe), Hanze University of Applied Science and the University of Groningen. In the future, other educational institutions in the Netherlands and the North of the country may join in. The monitor is updated and published annually. The Monitor ‘Talent in Beeld’ is available via the websites of NOM and New Energy Coalition.

The energy students and graduates will meet their potential employers of the future on April 22 at the online career event ‘Meet Your Future in Energy’, which takes place twice a year (now online). Some 45 companies are present this time and hundreds of students and professionals will be attending the event.

About Meet Your Future in Energy (April 22nd)

Entrepreneurs and students of MBO, HBO, WO and (young) professionals meet each other online during ‘Meet Your Future in Energy’ career event on Thursday, April 22 from 15.00 to 17.00 hours. Innovative companies that want a virtual ‘stand’ at the information market, want to submit vacancies, organize a workshop or otherwise want to participate can still register with the Energy Academy of New Energy Coalition. www.energyacademy.org

NOM provides supplementary venture capital / risk-bearing capital in the form of equity and/or subordinated loans, offers assistance with site selection, promotes investment in the Northern Netherlands and initiates projects which increase the competitiveness of regional business and industry. It focuses in particular on innovative companies of a transregional nature.

Northern Netherlands welcomes 10,000 ‘energy students’ for energy transition. Will it be enough?

Social side of sustainability