This week 7 cluster organisations of the North Sea countries signed a manifesto in Esbjerg (Denmark) commiting them to the Esbjerg Declaration of May this year by the government leaders of Denmark, Belgium, Germany and the Netherlands on the subject of sustainable energy production in the North Sea. 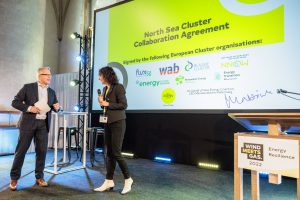 On behalf of New Energy Coalition CEO Marieke Abbink signed the manifesto during the Wind Meets Gas symposium in Groningen on Friday October 7.

“Today, more than ever, collaboration is key in developing and securing the energy system of the future. Following up on the Esbjerg Declaration by government leaders it is now up to the cluster organisations such as ourselves, to put their commitment into concrete actions. We are ready to move forward,” Abbink said.

From the announcement and the manifesto:

There is a wide potential for collaborations about technological innovation in the North Sea. That was emphasised when seven European clusters from Germany, The Netherlands, Belgium, Norway, and Denmark singed a joint manifesto in Esbjerg, Denmark on October 6.

All seven clusters represent large enterprises, small and medium sized companies, start-ups, and research institutions – all working with innovation around the North Sea.

Following the Esbjerg Declaration in 2022, there is a need to gather relevant organisations around innovation and technology development in the North Sea as to support the ambitious goals for European renewable energy from the North Sea, including offshore wind and green hydrogen, contributing to both EU climate neutrality and energy security.