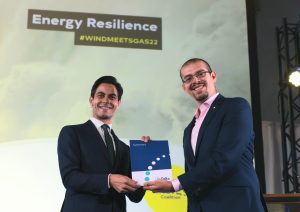 Today, Dutch Minister Rob Jetten of Climate and Energy Affairs received the interim report of the HyDelta hydrogen research programme from project leader Julio Garcia (New Energy Coalition) at the Wind Meets Gas symposium in Groningen. This report of the first phase (HyDelta 1) provides the results of much-needed research into the large-scale application of hydrogen in transport and distribution in existing gas infrastructure. The research programme now has a follow-up in HyDelta 2, the results of which are expected by mid-2023.

The HyDelta consortium, consisting of parties with extensive experience in researching and testing hydrogen transport and application, was formed in 2020. The research programme focuses on an integrated approach to solutions for the transport and implementation of hydrogen into the energy system. Directly applicable research is central. Results from the programme are always published and publicly available.

The report presents the results of 37 studies conducted in HyDelta 1. The study and research results are attracting interest from around the globe.

HyDelta 2 further examines the economic and technical incorporation of hydrogen gas into the national gas transport and distribution system and is extended to include research on its social and environmental aspects.

About HyDelta
HyDelta is a Dutch cooperation programme aimed at researching aspects surrounding transport and application of hydrogen in the existing natural gas infrastructure, with a focus on safety and economic feasibility. The programme maps ongoing and proposed Dutch plans. The focus of the research is on short-term applicability.