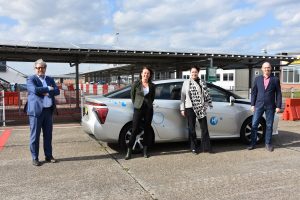 Hydrogen ambitions of Groningen Airport Eelde
Groningen Airport Eelde focuses with the initiative NXT Airport on making aviation and airports more sustainable. Together with educational institutions, the business community and the authorities they work on sustainability innovations within projects. The focus is primarily on hydrogen technology. It is the airport’s ambition to produce green hydrogen on the airport grounds and to use it for innovative applications on both land and air sides applications.

Hydrogen infrastructure
Between the runway, platform and taxiway at Groningen Airport Eelde, a solar park has been constructed with a capacity of 21.9 MW. Through electrolysis  green hydrogen is to be produced at the airport. The green hydrogen can then be applied in many ways, with a.o. plans for a multi-fuel filling station that serves both landside and airside. On landside, for example, passenger cars, trucks and regional buses can fill up. On the airside, ground handling equipment, hydrogen drones and hydrogen-powered aircraft will be served in the future.

Emission-free ground handling by 2030
Groningen Airport Eelde aims to have a fully emission-free ground handling system by 2030. To this end, the airport wants to deploy hydrogen applications. Together with Holthausen Clean Technology, the conversion of existing equipment and the development of innovative hydrogen-powered ground equipment, which is not yet on the market, is being looked at.

Cooperation with New Energy Coalition
Marieke Abbink-Pellenbarg, Managing Director of New Energy Coalion, is pleased with the cooperation: “New Energy Coalition connects parties for an accelerated transition to a sustainable energy economy. In addition to road, water and rail transport, we can now include air transport in the Hydrogen Valley. This is a very valuable addition and strengthens the position of the Hydrogen Valley, the testing ground for hydrogen development in the Northern Netherlands. We will use our knowledge to help Groningen Airport Eelde achieve their ambition to become the most sustainable hydrogen-powered airport in Europe.”